The names listed are the 14 known companies to have produced the M2 ammo can beginning September 21st of 1942.  In addition to these 14 there are also variations of this can that have been found without a makers mark and are referred to as Un-Marked.  The M2 replaced the M17 steel ammo box and several other earlier boxes and cans. The M2 ammo can was designed to hold link belts of 105 cartridges of  .50 cal ammunition for the M2 Browning machinegun, but was in fact also utilized for other ammo calibers and packaging.  There was a handful of different patterns used to produce the M2 can including one with a welded seam on every edge and one with only the bottom welded on and one corner seam.  The M2 can had a side opening removable hinged lid and a rubber gasket inside of the lid.  The M2 ammo can ceased production and use around 1950 when the newer M2A1 ammo can was introduced.

Shown under here is an example of various markings that can be seen on the M2 ammo boxes. All of these boxes are from various manufacturers. Some feature repack markings when the box was reused and some still feature their original markings. 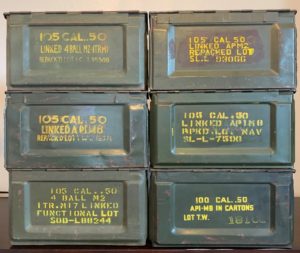 The steel M2A1 ammunition  Can / Box (also called Chest Ammunition: M2A1 or Box, Metal, M2A1) was introduced during the 1950s for .50 caliber machine gun ammunition, replacing the M2 .50 Cal. ammunition cans. The M2A1 ammo can was designed to hold link belts of 100 cartridges of .50 Cal ammunition for the M2 Browning machine gun, but was in fact utilized to transport and store many other ammo calibers and packaging. Handgrenades, small caliber ammunition, flares etc. ( see page .50 Cal, various, on this site )